VITA BREVIS ARS LONGA ...
On the long lasting impact of art over the brevity of life …

What kind of creativity do we need to cultivate as we step into the second decade of the 21st century?
Can artistic expression help us become conscious creators?

Creativity is on everyone lips and seams to be wanted everywhere, at school, at work and at home, as if creativity could be the answer to the drastic changes and challenges our society is facing. However looking at the amount of goods, products, technologies and infrastructures we have created over the last century, I am doubting our lack of creativity. Faced with the ecological and capitalistic crisis of this last decade shouldn’t we rather become aware of the dangers of our gift of creativity when essentially used at the service of productivity and marketing?
As the French philosopher Gilles Deleuze already prompted in 1995, “we are faced now with fundamental questions about what may or may not be meant by ‘creativity’. Information technology, communications and advertising are taking over the words ‘concept’ and ‘creative,’ revealing the activity of selling to be capitalism’s supreme thought.”

There is often some confusion between creativity and artistic skills. Creativity, our capacity to create something new, can be applied to all fields or utilitarian purposes and doesn’t require any artistic skills. Artistic expression activates both our creativity and imagination in ways that often engage our sensorial, emotional, intellectual and spiritual responses for no direct utilitarian purpose. Creativity is always closely related to imagination. Imagination is the conductor or spark that sets in motion any creative action. Our tremendous capacity for individual and collective imagination is probably what most differentiates us humans from our relatives from the animal world.

As Yuval Noah Harari describes in his book "Sapiens: A brief history of humankind 2011: “Seventy thousand years ago, Homo sapiens was still an insignificant animal minding its own business in a corner of Africa. In the following millennia it transformed itself into the master of the entire planet and the terror of the ecosystem. Any large-scale human cooperation – whether a modern state, an ancient city or an archaic tribe – is rooted in common myths that exist only in humans’ collective imagination.” What makes us sapiens so special among the rest of the living world is in fact our amazing gift of creativity and imagination; sadly we are now realising that it might also be our curse. Why are we inhabited by such tremendous need to create, a need that has become almost neurotic or at least unconsciously self-destructive? 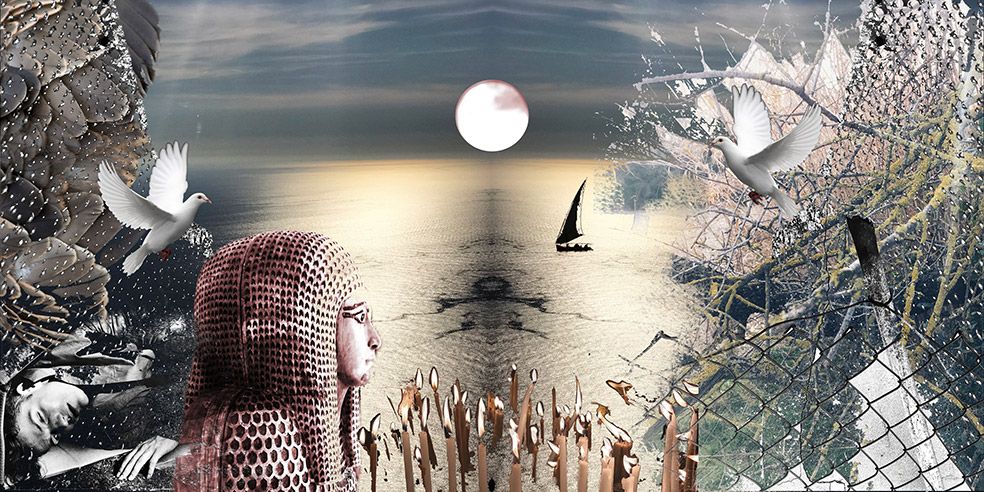 I have come to relate our gift of imagination to another unique aspect of our human condition: that is the awareness of our own mortality. If some animal species show some understanding of the irreversibility of death (like chimpanzee, elephants, maybe dolphins) none of them seam to undergo the realization of their own mortality as we do. By the age of 7 years old every human starts acknowledging the presence and inevitability of death. Could this neurotic and dazzling urge to create be driven by our existential fear of death, our lack of acceptation of its inevitability and some unconscious ancestral survival behaviours?

At the dawn of our civilization, our human gift of collective imagination emerged through the elaboration of myths. Starting with ancestral shamanistic tribal rites, it developed into complex religious and mythological belief systems. From the Egyptians to the Incas, from Hinduism to Buddhism, from ancient Greece to Sufism, Judaism and Christianity, all the myths and religions we have elaborated revolve around our central intent to manage the unmanageable: the terrible uncertainty we are facing in front of the irreversibility of death. Today god has been replaced by science and science is at the service of our conjuration of death searching for immortality through technology, medicine, consumerism or trans-humanism.

The arts have been for centuries closely linked to myth and religions. We have engaged in art infused rituals to celebrate the cycles of life, conjure healing and pray the gods. Artistic creation has been our “sacred” way to say yes to life, yes to Eros, yes to love and beauty while also transcending Thanatos to accept or conjure death. The pyramids of Egypt or the Taj Mahal are striking examples of our intent to transcend death and reach immortality through amazing works of art. Art and imagination are our human way to tell the story of our relationship with the world, our sacred intent to make sense of life and death. Artistic expression is our purest response to the aesthetic and symbolic dimension of life. 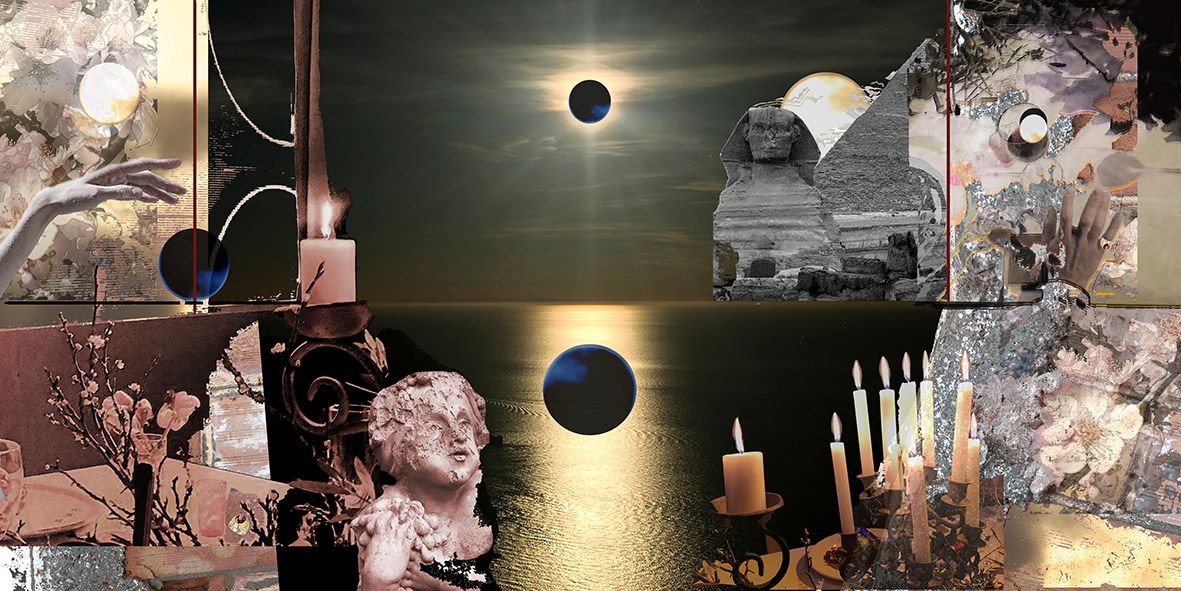 If time and its irreversible passage is part of our human condition, art seams to give us opportunities to stop the ticking of Chronos, altering our perception of time and therefor of death if only for a moment of awe. The artist when creating opens liminal spaces where time becomes distorted, where time slows down or even stops. The work of art captures and immortalizes moments of life that will never come again. Time stops when we are immersed in artistic experiences as viewer or creator: a ritual, a concert, a theatre piece or a dance performance. Kairos the god of perfect timing illustrates how our perception of time can change when we break through the limits of Cartesian Chronos.

Aesthetic experience whether in the contemplation of a work of art or in the act of art making is a transformative peak experience that can shift our ordinary perception of time and reality. “Our senses are operating at their peak. We are fully present in the current moment, resonating with the excitement of what we are experiencing, we are fully alive.” Says Ken Robinson expert in creativity and education. Peak experiences are moments of heighten perceptions and intelligence that stand out from ordinary life in which we receive insights and deep understandings. The memory of such events is lasting and people often liken them to moments of extended consciousness or spiritual awakening.

A key feature of the 21st century is the accelerating interconnectivity of human activity and information across time and space due to digitalization, technology and Internet. Meanwhile our understanding of the complexity of the web of life is leading us to think in terms of systems, connectedness, relationships and context. There is a profound need to extend our consciousness as creators to grasp this interconnectedness/ complexity of life and its intricate web of relationships. Could the arts help us become more conscious as creators and extend our perceptions of how each of our creative actions ripples within the totality of the web of life?

Art is a mirror of our culture and our consciousness; a place where we can push our boundaries ever further, a place where we can make sense of our human condition. Artists create from their own complex inner constellation of perceptions, ideas and feelings. This interdependent inner world responds in symbolic ways to the outer world and shapes our art.

In expressive arts we practice Poeisis: knowing by creating. We see art making as a safe space where we can experience ourselves as creators, make sense of our life, become aware of the empowerment and aliveness of our creative gift and find forever-new ways to adapt in an interdependent existence within a complex world. “By decentering from the literal reality of our lives we can engage a practice of the imagination that opens up new horizons and draws on resources that may have previously lain dormant.” Stephen Levin in New developments in Expressive Arts 2017

For the experienced or aspiring artist, art making can be therapeutic and transformative in itself, especially if the artistic process is framed with the principles of expressive arts and associated with the mindful practice of phenomenological observation. This is what I call the practice of conscious creativity, experienced in the poeisis of art making. “It is not enough to engage in art making, afterwards we must step back and reflect in its significance. In expressive arts we call this mode of reflection aesthetic analysis, a phenomenological process of understanding in which we allow what shows itself to show itself without imposing meaning upon it” Stephen Levin in New developments in Expressive Arts 2017.
Art making becomes an opportunity to consciously exercise and observe our “sacred” human gift of imagination and creation, a gift that has kept us alive and evolutive since the dawn of our civilisation. Could a conscious and mindful practice of the arts inspire more integrated ways to use our creative gifts in challenging times and highly interdependent contexts?